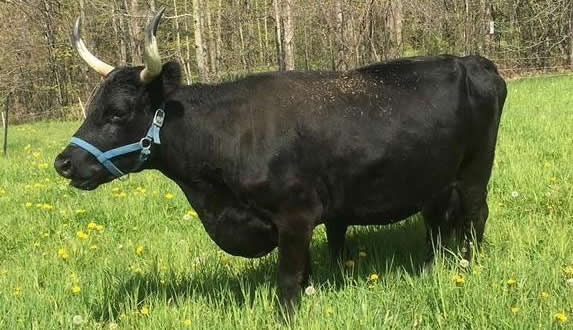 Kerry cattle are most probably the descendants of the Celtic Shorthorn, brought to Ireland as long ago as 2000 B.C. They are still found grazing in the marginal pastures of the hill districts of southwestern Ireland. Kerries were imported to the United States beginning in 1818 and the breed prospered through the early 20th century. But by the 1930’s, Kerries had disappeared from North America however in the mid 1970’s Dr Russell Scott imported eleven Kerries into Canada that are the foundation Kerry stock of today’s Kerry population in Canada and United States. Today there are very few Kerries in the United States and Canada less than 75 breeding females and only a few small herds are being bred to pure Kerry bulls.

The Kerry is a small-sized, fine-boned dairy breed, mostly black in color and can have a small amount of white on the udder. Cows weigh between 780-1000 pounds and are horned. Milk production averages 7000-8000 pounds, but can occasionally exceed 10,000 pounds, with over 4% butterfat. Kerries are hardy and long-lived, often still calving at 14-15 years of age.

By 1983 the world population of pedigreed Kerries had dropped to around 200. The Irish Department of Agriculture has since taken steps to support the maintenance of the breed and numbers are again creeping upwards. Here in the USA and Canada Kerry numbers have drop to less than 75 breeding cows and not all are being bred to pure to Kerry bulls.